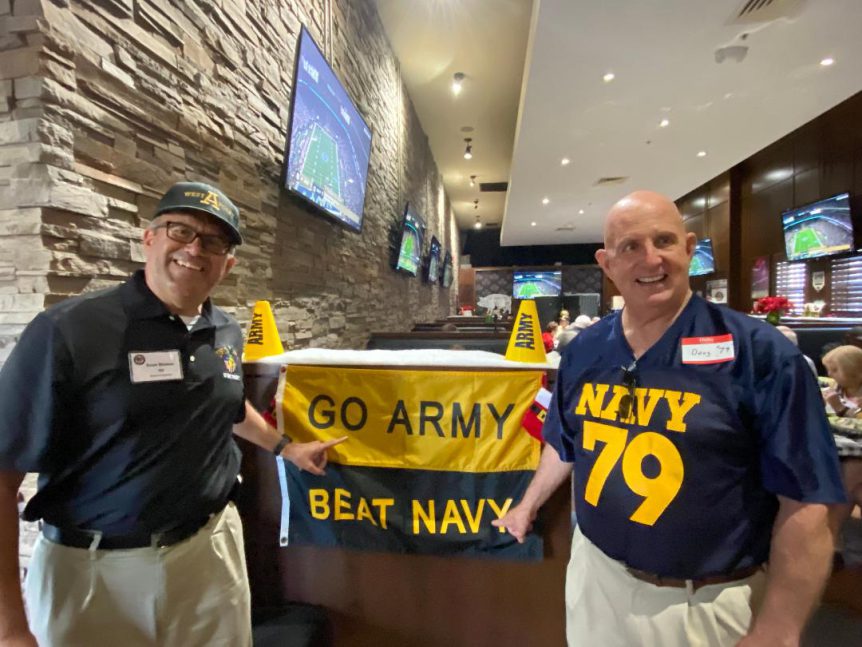 The West Point Society of Naples held their Annual Army vs. Navy Football Game event at Bokampers Sports Bar & Grill in Naples, Florida on Saturday, December 11, 2021.  There were over 60 Old Grads, Young Grads, Parents Club Members, Brothers, Sisters, and yes, even some Naval Academy grads in attendance at this exciting event.  Rod Vitty, Class of ’55 and Distinguished Graduate was in attendance with a big group representing the Class of ’55.  The Class of ’64 had a large contingent on hand to cheer on the Army Team.  Robert and Randi Powell, parents of ’18 and ’20 grads, were representing the West Point Parents Club of Southwest Florida.  Bob and Kristy Jahn, parents of ’08 grad and a mainstay of our local West Point Field Force were also in attendance.

At half-time and with the game lead, Pete Lily, ’70, led the entire group and venue in a beautiful singing of “God Bless America”.  We recognized the Oldest Grad, Ted Livesay ’55 which was very close with his other classmate, Rod Vitty.  The Youngest Grad was Joshua McCarver ’07 who was there for the first time.

We needed Mike Kostoff ’79 to lead us all in a Rally Rocket in the 4th quarter to get the Army Team momentum back.  Despite the final score, a fun time was had by all.  Until next season, Go Army, Beat Navy!